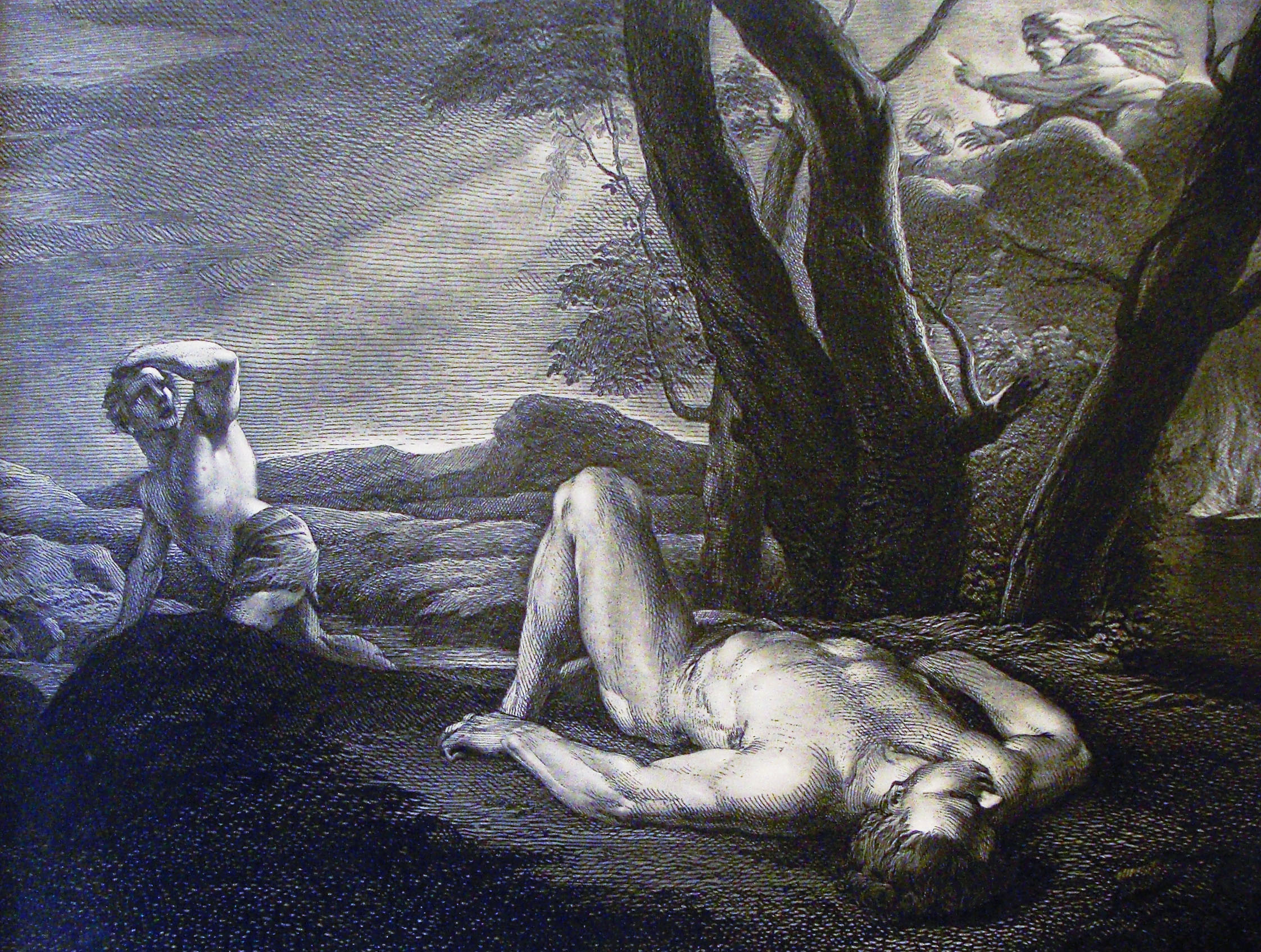 According to advocates of this teaching the serpent seduced Eve into eating fruit with Satan. The alleged evidence is in Genesis 3:13, which reads “[…]the woman said, The serpent beguiled me, and I did eat.” The word הִשִּׁיאַנִי (na-sha H5377, H5378), or ηπατησε (a-pa-ta-o G538) translated into beguile means to deceive, to outwit, or to cheat. Those who adhere to this doctrine argue that the word implies intimate seduction, however, when looking at the same word used in other  passages they never seem to imply anything of that sort. Take 2 Kings 18:29 For example “Thus saith the king, Let not Hezekiah deceive you: for he shall not be able to deliver you out of his hand:”. Surely we are not to believe that the King wanted to warn the people not to let Hezekiah intimately seduce them. Isaiah 19:13 is particularly fascinating, reading “The princes of Zoan are become fools, The princes of Noph are deceived; They have also seduced Egypt, even they that are the stay of the tribes thereof.” One could argue that the word seduced sets the context for the word deceived since this passage says that Egypt was also seduced as the princes of Noph were, affirming that the word can imply seduction. However, the word translated into seduced in this passage is תָּעָה (ta-ah H8582) which means to err or to lead astray; thus, if the word seduced is meant to set the context for the word deceived, the word should be understood to imply being lead astray instead of intimate seduction.

Another way believers in the serpent seed try to establish that eating the fruit is symbolic for seduction is by arguing that the same kind of symbolism is used in the Bible on another occasion. Proverbs 30:20 allegedly mirrors this symbolism when the writer says “Such is the way of an adulterous woman; she eateth, and wipeth her mouth, and saith, I have done no wickedness.” Notwithstanding, there is no considerable link between Genesis 3 and the passage in Proverbs aside from speculation. For instance, Eve never claims that she had done no wickedness after indulging in the forbidden fruit. In fact, Eves experience of shame after consuming the fruit can be seen in Genesis 3:8, as it says “… Adam and his wife hid themselves from the presence of the Lord God…” as they were naked and ashamed of themselves. Additionally, if God said that Adam and Eve could freely eat anything in the garden (Gen 2:16), Eve would not be committing adultery by fornicating with the serpent. Therefore, it seems that this parallel results from eisegesis rather than objective examination of the passages in question.

Let’s suppose that eating the fruit is indeed symbolic language for copulation with the serpent. Consider this passage in the Genesis account in light of this presumption “…she took of the fruit thereof, and did eat, and gave also unto her husband with her; and he did eat.”(3:6) If Eve gave some of the fruit to her husband to eat with her, Adam must have also partook in this sexual encounter with the serpent. Do proponents of this doctrine expect one to believe that Adam and Eve had a ménage à trois with Satan? Perhaps not, but such apparent implications of this interpretation cannot be ignored. Another oddity can be seen in a passage previously mentioned, where God first gives Adam and Eve instructions on what can be eaten: “And the Lord God commanded the man, saying, Of every tree of the garden thou mayest freely eat:  But of the tree of the knowledge of good and evil, thou shalt not eat of it: for in the day that thou eatest thereof thou shalt surely die.” (Genesis 2:16-17). This implies that God told Adam and Eve that they could freely fornicate with anyone so long as it was not the Serpent, which does not make sense considering that Adam and Eve were the only people in the garden at the time (Genesis 2:4-8, 3:20). There is also the question of why such a serious consequence is told to us in a fashion so obscure that its true meaning is quite difficult to identify. One would think that the writers of the Torah would want such an important message to be evident.

Evidence of The Bloodline

If Satan did have a bloodline on Earth it would be reasonable to believe that the writers of the Bible would document their knowledge of his descendants, as this would not only be important for the Hebrew people to establish divine inheritance, but also to separate from the bad seeds from the good ones. There are a few passages that proponents of this doctrine argue are indeed references to the biological ancestors of Satan that came about as a result of Eve eating the fruit.

Genesis 3:15: “And I will put enmity between thee and the woman, and between thy seed and her seed; it shall bruise thy head, and thou shalt bruise his heel.”

This is argued to be evidence that Eve had children with both the serpent and Adam. Allegedly Cain was the seed of Satan, and Abel was the seed of Adam, and these are the seedlines that God puts enmity between. This interpretation is questionable since we read in Genesis 4:1 “…Adam knew Eve his wife; and she conceived, and bare Cain, and said, I have gotten a man from the Lord”. Why would Eve say that she had gotten a child from the Lord when Cain is allegedly the son of Satan? Neither Adam or Eve seem to be aware of the fact that Satan is the father of Cain, nor do the writers who later documented the event.

Allegedly this passage demonstrates that Jesus had knowledge of the dual seed doctrine, as he refers to those who are children of the wicked one. Those who ascribe to the serpent seed doctrine hold that this passage is not about spiritual children of the wicked one, but biological children. If this is the case the whole sentence should also be taken literally, and since Jesus is considered the son of man (Mark 2:9-10 & 8:31, Matthiew 9:5-6, luke 22:69) he would be the biological father of the children of the kingdom spoken about in the passage. Since Jesus was not the literal father of anyone as far as it can be known from the Bible, it is reasonable to conclude that the evil bloodline is also not literal.

1 John 3:11-12 “For this is the message that ye heard from the beginning, that we should love one another. Not as Cain, who was of that wicked one, and slew his brother.”

One could argue that this passage and similar passages (John 8:44, Matthew 3:7) refers to a literal bloodline of Satan, but it is unlikely that this is the case. If we are to believe that passages of this context refer to a literal bloodline of satan, the following line in the same passage reading “Whosoever is born of God doth not commit sin; for his seed remaineth in him: and he cannot sin, because he is born of God.” (1 John 3:9) would imply that God also has a literal bloodline. Additionally, if “all have sinned, and come short of the glory of God;” (Romans 3:23) then no one can be the literal child of God since the passage says that a child of God cannot sin. Taking this passage literally would imply that everyone is a child of Nachash .

There are passages in the Bible that seem to contradict the doctrine of the dual seedline. These passages—along with the other problematic passages previously mentioned—must be reconciled with their interpretive conclusions if one is to take this doctrine seriously.

Genesis 4:15 “And the Lord said unto him, Therefore whosoever slayeth Cain, vengeance shall be taken on him sevenfold. And the Lord set a mark upon Cain, lest any finding him should kill him.”

Why is God protecting Satan’s baby? It seems very inconsistent that God would protect a person whose existence would entail breeding a seedline of evil and destruction. It would be far more reasonable to assume that God wanted to protect Cain because He knew that he wasn’t inherently evil. This can be seen in Genesis 4: 6-7 when God sees that Cain was angry that He did not take favor with his grain offering and remarks “If thou doest well, shalt thou not be accepted? and if thou doest not well, sin lieth at the door. And unto thee shall be his desire, and thou shalt rule over him.” God seems to believe that Cain can choose to serve God, which goes against Jesus’ teaching that “A good tree cannot bring forth evil fruit, neither can a corrupt tree bring forth good fruit” (Matthiew 7:18) as Cain—being a corrupt tree—wouldn’t be capable of bringing forth good fruit.

Acts 17: 24-26: “God that made the world and all things therein[…]he giveth to all life, and breath, and all things;  And hath made of one blood all nations of men for to dwell on all the face of the earth, and hath determined the times before appointed, and the bounds of their habitation;”

This passage states that God not only made all the things on the Earth, but that he made all nations of one blood. As far as the writer of the book of Acts is concerned, God is father of all that lives and has ever lived. John 1:3 strengthens this intepreitation, reading “All things were made by him; and without him was not any thing made that was made”. If not a thing that was made was created without God then it is logical to conclude that Cain also was not made without God. These passages –along with those which are similar (Colossians 1:16)–further weaken the argument that Cain was a literal descendant of the evil one.

Critical investigation of the dual seedline doctrine reveals that its interpretive framework relies on questionable eisegesis of several biblical passages. It seems that the writers of the the Bible were not aware that Cain was the son of Satan if it is true. In light of the lack of textual support for this interpretation and passages in the bible that contradict the foundations of this doctrine, it is reasonable to conclude that the dual seedline doctrine is probably false.